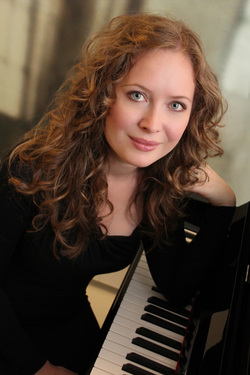 Canadian pianist Janice Fehlauer is noted for her musical creativity and diverse pianistic interests.  Janice was the gold medalist of the Wideman International Piano Competition and the winner of the University of North Texas Concerto Competition, and won second prize in the Los Angeles International Liszt Competition and the Hodges Competition for 20th-Century Music.  Recent appearances as concerto soloist in the USA include performances with the Mississippi Symphony, the North Florida Symphony, the Meridian Symphony, the Lewisville Lake Symphony, the Clear Lake Symphony, the Baytown Symphony, Symphony North, and the UNT Symphony, as well as with orchestras across Canada.  Janice has performed solo recitals across North America, including the Philips Collection in Washington, D.C., the Clayton Piano Festival, and the Dame Myra Hess Memorial Concerts Series at the Chicago Cultural Center, broadcast live on WFMT. She recently completed a solo recital tour of England and Scotland, including a performance at the Edinburgh Fringe Festival.

In addition, Janice is a sought-after collaborative artist who has performed in many chamber recital series, as well as being on staff of the American Institute of Musical Studies in Austria for several years.  Janice served as repetiteur and assistant chorus master at The Dallas Opera; a highlight of her time there included working with the chorus and soloists for the world premiere of Jake Heggie’s acclaimed new opera, Moby-Dick.  Janice has also played and coached for Fort Worth Opera, Taos Opera Institute, UNT Opera Theater, Moores Opera Center, and the Houston Symphony Chorus, and has been a vocal coach and music director for Houston Grand Opera's educational programs.

Janice is a dedicated piano teacher who has taught guest masterclasses in Canada and the USA, and now teaches at the Kingwood Music School which she owns and directs.  She also seeks ways of sharing her love of the piano with non-traditional audiences. While in Vancouver Janice performed regularly for the UBC Learning Exchange, an organization that sought innovative ways of presenting classical music to underserved audiences in Vancouver’s Downtown Eastside.  Now in Houston, she enjoys playing at The Turning Point, a shelter for homeless seniors.

When not at the piano or immersed in a book, Janice can be found pursuing her love of painting and marathon running, or spending time with her husband and young daughters in their beautiful adopted city of Houston.